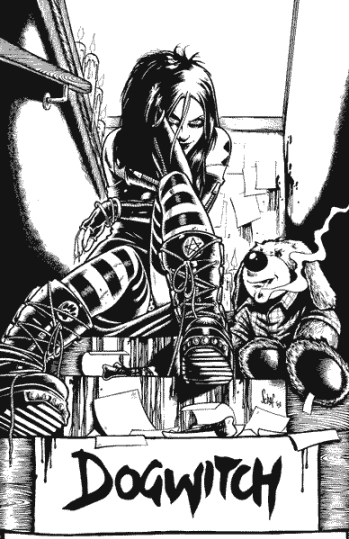 Violet Grimm:"Some people will tell you that superstition is the religion of fools…Others may say that Religion is the superstition of fools…Well, let me tell you this…the post powerful Magicks were spawned by these very contradictions…’cause you always need a little friction to get a good spark."
"Banished deep into the evil Banewoods for daring to practice her own unique brand of Molotov Magick, outcast Dogwitch Violet Grimm continues to stretch the boundaries of accepted 21st Century witchcraft. As tales of bad sex and dangerous voodoo spread her infamy through the Banewoods, Violet captures the attention of a multitude of weirdos and resigns herself to what she believes is her predestined B-movie lifestyle. Churning out provocative home videos for a berserk and hungry fan base in her pursuit of arcane knowledge, she feeds her diary with the dating rituals of the sick and heinous. Violet is the Garbo of witches, a reclusive legend in a depraved, gory, funny and fiendishly sexy world." Dan Schiffer
Advertisement:

Dogwitch, written and illustrated by British artist Dan Schiffer, was first published in 2002 until 2005 ran for 18 issues on a bi-monthly schedule. The 18 issue run was broken up into three seasons dubbed: Direct to Video, Twisted, and Mood Swings. However, as of February 2020, the Dogwitch omnibus has been announced for launch later in the year. Thus, marking the 15-year anniversary of the series.

Issue zero 'Hot Spell' and issue one 'Nefariously Kinky' have been made free to read. Both can be found on Bleeding Cool's blog here. [1]

Examples of Tropes by Episode

open/close all folders
Season One: Direct to Video