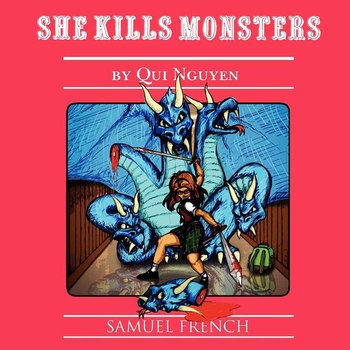 "Rumor has it you know a thing or two about D&D."
— Agnes Evans
Advertisement:

She Kills Monsters is a dramatic comedy play by Qui Nguyen that debuted in 2011. It is the story of Agnes Evans, a young woman leaving her childhood home shortly after the death of her geeky little sister, Tilly. Upon finding a homemade Dungeons & Dragons module Tilly made shortly before her passing, Agnes decides to play the game in order to understand her sister more. To this end, she enlists the assistance of Chuck, a teenager who used to play D&D with Tilly.

The play jumps between the real world and the game world as Agnes travels through the quest from the module to learn about the girl she called sister.

Along with the original version, Nguyen later created a "Young Adventurers Edition" for high school students and She Kills Monsters: Virtual Realms in 2020 for video conferencing-based productions.

She Kills Monsters provides examples of: