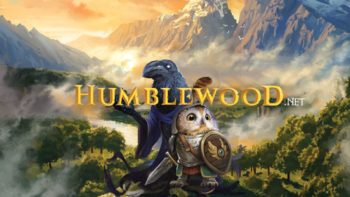 "It's got birds, you guys. BIRDS!!!"
Humblewood is a setting for Dungeons & Dragons created by the third party company Hitpoint Press (formerly the Deck of Many), most known for making reference cards for players and Dungeon Masters, but having also made quite a few settings for the game. Humblewood foregoes the typical humanoid races of D&D in favor of allowing the players to play as Funny Animals straight out of old fables, and focuses on themes of classical fairytales and adventure.
Advertisement:

In the distant world of Everden, hidden between the swamps of the Mokk Fields and the mountaintops of the Crest Mountains, there lies a great forest that thrums with the Great Rhythm of Life and Death. This is a magical place, where intelligent beasts and birds take the places of the humanoids of other worlds. Two peoples live in this wood, the Birdfolk and the Humblefolk, and have done so in peace for generations, under the peaceful rule of the Birdfolk who inhabit the Great Tree City of Alderheart. For centuries, the Woods have endured thanks to the industry and compassion of its people. Recently, however, this peace has been threatened by conflict and catastrophe.

Spreading from the Scorched Grove, where a great wildfire once raged, forest fires have taken root across Humblewood. Those struck by these fires often seek out new means of survival, some taking up weapons and turning their gaze towards Alderheart. In the crag mountains, the ancient Bandit Coalition has reformed, and is once again raiding the peaceful towns on the outskirts of Alderheart territories. In these troublesome times, tensions between Humblefolk and Birdfolk flare up once again, threatening to reduce this peaceful era to ashes.

The Woods call out for brave heroes to quell the flames, restore peace, and once again restore balance to Humblewood. Will you answer the call?