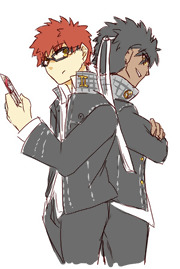 The official covernote …depicting Shirou to the left holding the card representing the Servant Saber class and Avenger to the right wearing a headband, both dressed in Yasogami High's winter uniforms. The author refuses to elaborate.
"Welcome to Inaba, Yu Narukami... or should I say Shirou Emiya?"
— Summary's closing line
Advertisement:

(also known as Kishou, a fellow troper). The project has been collaborated partly with Nameless Flame Wielder of FateBlack Reflection, but has since been excused from the project due to conflict of work and time.

Borrowing from similar plotlines of Shirou's pre-fire identity, Shirou Emiya was once known as Yu Narukami, who was thought to have died together with his parents in the Fuyuki Fire. His guardian Taiga Fujimura decides one day to find his living relatives so he could cope and move on with the loss of his stepfather Kiritsugu. With time, diligence, and the timely help of a blue butterfly, she locates the Dojimas.

In hopes to build a family connection, Taiga reluctantly allows Shirou to spend a year long stay with them in Inaba. But a dark cloud looms over the once quiet town. With the help of his new friends, mysterious benefactors, and the power of Persona, Shirou faces his first great trial as an Ally of Justice: the Inaba Serial Murder Case.

This story is also hosted on three different sites in addition to FanFiction.Net: Spacebattles

, and the Beast's Lair

, each with their own dedicated fan following and updated at the same time.

This Fanfic has examples of: