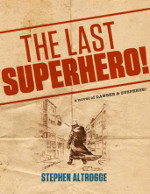 The Last Superhero is a 2012 novel by Stephen Altrogge. It follows John Utticus Wagner, retired superhero, his son Orville Wagner, a failed klutzy superhero, and John Wagner II, Orville's son as they attempt to make their mark in the world by taking on a new supervillain by the name of Boom who has taken to setting up bombs in the city. They quickly learn that this new supervillain knows who they are and is looking to take them out first.