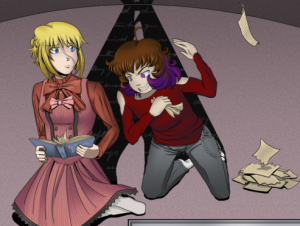 Get Genre Savvy or die.
"Welcome to Lineage Haven, where the only way to survive is to read between the lines..."
— Profile Quote
Advertisement:

is a webcomic by Alexis Royce, about split personalities Anna and Susan Enfield who journey to England after discovering that they are descended from Edward Hyde and that there is an entire subculture of people who are descended from characters of famous old works and have been cursed by "The Binding" to live the moral of their sire's story... or face the ironic consequences.

Confirmed to feature Sires/Dams from: