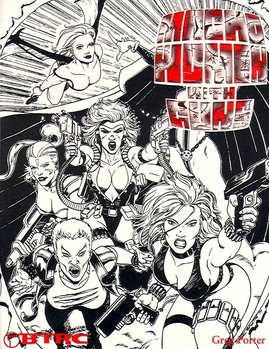 Macho Women with Guns is a Tabletop RPG that lets you play a specific type of character. Guess which type. Go on, guess.

The first edition appeared in 1988, a 12-page booklet with a minimum of rules and a maximum of tongue (in cheek, that is). Skills include Run in High Heels and Seduce Creature. Enemies include TV Evangelists, Drunken Frat Boys, Cthulhu, and Isaac Azathoth.

The second edition appeared in 1994 (expanded to 70 pages). It consolidated and expanded upon all the supplements and background released since the first. In the Machoverse, civilization—indeed, reality itself—is collapsing. Characters can belong to the saintly Sisters of Our Lady of Harley-Davidson or go it alone. They fight against the evil Batwinged Bimbos from Hell or the last remnants of male chauvinist piggery.

It is apparently not the same game as the non-existent Kung-Fu CB Mamas On Wheels vs. the Motorcycle Aztec Wrestling Nuns, despite the obvious parallels.