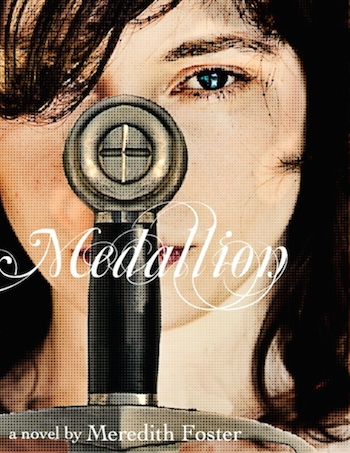 "Sometimes all you can do is protect those you love. And sometimes you can't even do that."
— Tamox
Advertisement:

Medallion is a work by Meredith Foster about coming-of-age, loyalty, trust, and a medallion. It can be downloaded free of charge here

Set in an unnamed world, the story mostly takes place in an immense forest. Andreya Orifax, queen of the Ilviren people, is frustrated with her life and the responsibilities her position gives her; at the same time, her people are under threat of extinction from Kespa, who killed the previous rulers and is ruling with an iron hand. Dreya doesn't want anything to do with heroism, though - all she wants is to be left to do as she wishes. But after she meets a unique individual named Tamox, she finds herself facing the maturity she never wanted to possess.

The story has two halves, both of which can be enjoyed as a standalone work. One is the novella itself, the other is a series of vignettes and short stories featuring characters from the book and detailing events that happened before or during the story. Dreya, Anshi, and Saela's family feature prominently. The free download contains only the novella, but a deluxe edition of the ebook will contain both halves of the project.

Not to be confused with the Jackie Chan movie The Medallion.