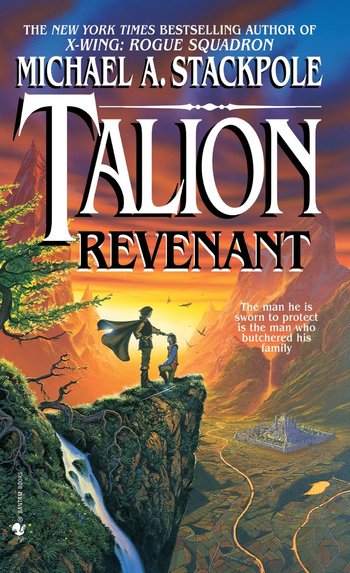 Talion: Revenant is a fantasy novel written by Michael Stackpole and completed in 1986 but not published until 1997, since it was considered too long for a starting writer. It centers around the character of Nolan ra Sinjaria, a Talion Justice who pursues criminals and who people widely fear due to his ability to kill by sucking the soul from someone's body with the magical death's head tattoo on his right hand. Nolan however is a good, honorable man (though he does have his bad moments), who dislikes that Talions are feared (especially Justices) and unlike some of his colleagues works to earn the respect of the people he protects instead of preying on their fears. He was orphaned when his country Sinjaria was conquered by its neighbor Hamis, and joined the Talions (an order that maintains stability in the rivalrous kingdoms) with the hope of someday bringing the man he holds responsible, King Tirrell of Hamis, to justice. Now, though, he has been ordered by his masters to protect that same king from a dire threat to his throne, and while he reluctantly obeys, some of the ghosts of his past begin to return...
Advertisement:

Stackpole is publishing a sequel, Talion: Nemesis, in serial novel form in his Scratch! e-zine on Patreon.