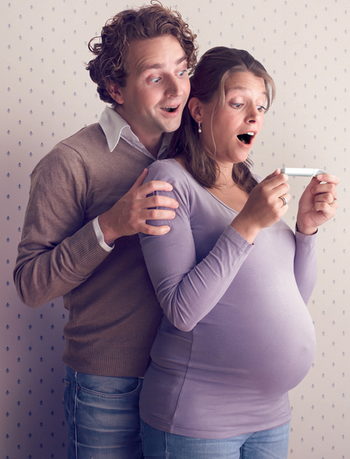 Her fetus is facepalming right now.
Sometimes the Law of Inverse Fertility hits so hard that the woman doesn't even realize she's pregnant until she's close to going into labor (and sometimes not even then). Cries of "But I Can't Be Pregnant!" and "how could I have missed this?" ensue. For whatever reason, when they do notice before giving birth, it isn't the lack of periods or Morning Sickness that tips them off, but rather the baby bump and Wacky Cravings. It seems that heroines just don't keep track of their monthlies. Cue Babies Make Everything Better!
Advertisement:

Oddly enough, this does occasionally happen in Real Life. The medical term for such events is cryptic pregnancy

Contrast with My Secret Pregnancy, where the mother knows, but keeps it a secret from the world at large. May be justified in the case of a Mystical Pregnancy or a Mister Seahorse situation. A novel way to ensure that Good Girls Avoid Abortion, by making it too late for them to seek an abortion. Subtrope of Surprise Pregnancy.