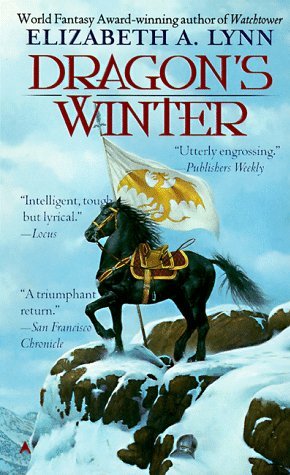 Dragon Keep rides to war in the spring.
"His name was Karadur Atani. His brother called him Kaji; the officers of his household and garrison called him, to his face, my lord, and privately, among and to themselves, Dragon."
Advertisement:

Dragon's Winter is a High Fantasy by World Fantasy Award-winning author Elizabeth A Lynn. The story revolves around twin brothers, Karadur and Tenjiro, sons of the dragon lord of Ippa. Karadur is a dragon-child like his father, but Tenjiro is as human as their mother...and jealous of his elder brother. When Karadur grows to manhood, Tenjiro leaves their home to study magic. But the only power he desires is his brother's, and so Tenjiro betrays his brother, binding his power and preventing him from taking his dragon form.

Meanwhile, a man called Wolf arrives in the nearby village of Sleeth. The winters of Ippa grow longer and colder than any can remember. And rumors from the north speak of a strange Black Citadel risen from the earth, and with it terrible creatures from the oldest of legends. From the north, monsters appear — threatening soldiers and villagers alike — and Karadur is left with no choice but to ride to war against his brother.

The book garnered general praise when it debuted, including from such luminaries as George R.R. Martin.

The sequel, Dragon's Treasure, was released six years after the first novel was published.

Like many of Lynn's previous works, the Dragon series contains representation of non-heterosexual relationships, in this case between the main character Karadur and his best friend Azil. While it could be considered Homoerotic Subtext in the first book, there is blatant confirmation in Dragon's Treasure, in which Azil describes Karadur as his lover while they lie in bed together. For some reason, marketing of the books tends to focus on the conflict between Karadur and his brother (for the first book) and the romance with his female love interest (for the second book), at the expense of the equally important subplot of Karadur and Azil's relationship.