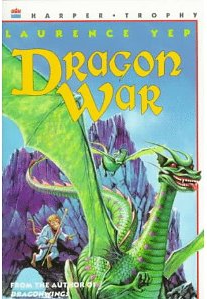 First published in 1992, Dragon War is Laurence Yep's final installment in the Dragon Series. It is the sequel to Dragon of the Lost Sea, Dragon Steel and Dragon Cauldron.

The Boneless King manages to capture Shimmer, Monkey and Indigo, and steal Baldy's Cauldron. The events of the book are mostly about their attempts to get it back, while preparing troops for a mounting war between the humans and the dragons.