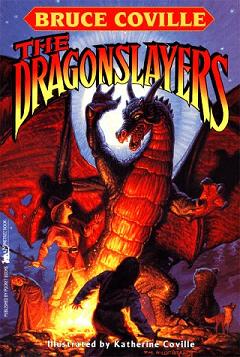 Let's play the "Which one's really the Rebellious Princess" game!
King Mildred raised his hand and said, "I pronounce you the Dragonslayers! Now go forth and slay this mighty beast."
He didn't notice the look in his daughters face, nor hear her mutter to herself, "Not if I get there first, Daddy."
Grizelda: (Singing)
"Revenge can be sweet
Can be fun
Can be fine"
Advertisement:

The Dragonslayers is a both a musical and a children's book (1994) based off it (the latter written by Bruce Coville). It's the typical tale of a princess who needs to get married soon. Her parents are in despair, as she is not interested in anyone.

And then the dragon attacks the kingdom. But even with the king offering half the kingdom, and the princess's hand in marriage to the one who kills said dragon, no one is willing to take up the job except Elizar, who is old enough to be the princess's father. Naturally, she's not happy with this. Disguising herself as a boy, she runs off the kill the dragon herself. But the dragon isn't a "normal" dragon, and instead it is the creation of a witch, who wants revenge for something...

Along the way, the Princess-disguised-as-a-boy runs into Elizar (who is really the Kingdom's oldest squire), his page, Brian (who has a birthmark that could explain a lot of things), a talking bear, fox and cat and the one who created the dragon in the first place.