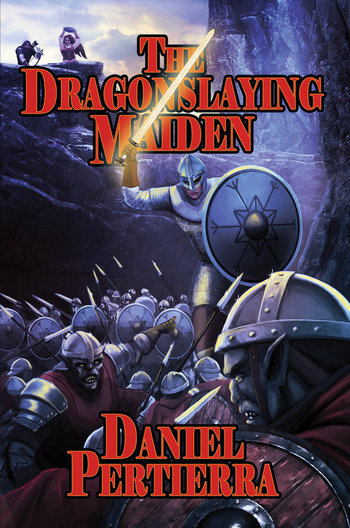 "She held the gate of Denmark against the trolls!"
Advertisement:

The Dragonslaying Maiden is a Heroic Fantasy novel by first-time American author Daniel Pertierra, published in 2017.

It's a day like any other in Valhalla, full of drinking and fighting and a whole lot of noise. What sets this day apart is that, when Odin tries to offer a toast to Dana the Dragonslaying Maiden, a figure of some importance in the years before the Viking age, nobody knows who he's talking about. This greatly unnerves the All-Father, who was an active participant in the events surrounding her.

Retiring from the hall, he can't let the matter rest despite the pleading of his ravens. Melancholy and resolved, he decides to revisit the tale and commit it to writing: as an active player in the events of her story of magic, betrayal, warfare and personal discovery, he's got a lot of things to say about this forgotten heroine from a time when monsters still roamed the Earth.

It starts with a little girl named Linda, who outgrew her home in a big way and went on to change the world...

The Dragonslaying Maiden provides examples of: