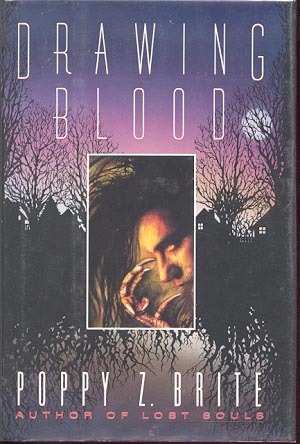 Drawing Blood is a 1993 horror novel by Poppy Z. Brite.

After twenty years of questions, Survivor Guilt, and self-loathing, artist Trevor McGee returns to the house on Violin Road where his father murdered Trevor's mother and younger brother before killing himself. The mystery of Trevor's life is why his father spared him from the massacre, and he hopes that by coming back, he will find the answer.

What he finds instead is a wily computer hacker named Zachary Bosch, currently on the run from the Feds and with plenty of family demons of his own. Together the two explore the abandoned house, which seems to be all too aware of their presence and taunts them with indecipherable messages and ominous threats. In spite of the growing danger, and much to their own surprise, Trevor and Zach find themselves falling in love for the first time in their troubled lives.

But the house is a gateway to Birdland, the wild, dangerous world of Trevor's father's fevered imagination, and in Birdland, the only rule is that every true artist must kill the thing he loves.