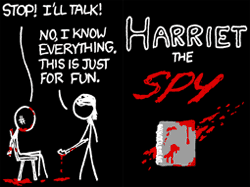 When Harriet the Spy goes Darker and Edgier.
Thermian Captain: I have told you all I know... if you have any mercy within you, please, let me die.
Sarris: When I grow weary of the noises you make, you shall die!
— Galaxy Quest
Advertisement:

Torture. Sure, some characters gloat until their victims are rescued. But some gloat and torture at once. And others just get to doing it.

Often shown only by implication, or in its aftereffects (which can be nasty even if the victim survives), for obvious reasons.

In ascending order of reason nastiness, the typical reasons: for information, for punishment, and for pleasure. The punishment may, indeed, be for another character to have to watch or see the results. But others are possible. A Mad Scientist may torture to learn about the victim. Human Sacrifice may call for a particular and gruesome death, and if mere death is too good for some criminal (or alleged criminal), he may be tortured to death. If the person wants to break the victim, this may be a way to force him to say that 2 + Torture = 5, or somehow get the victim to join them.

May be a Fate Worse than Death, calling for a Mercy Kill or I Cannot Self-Terminate when the hero comes upon the victim — the victim is likely to plead for death even if the hero can save him, but the hero is (obviously) prone to override the plea and drag him out of there, if he can. Recovery is likely to be improbably complete.

Heroes torture, sometimes, when they are in a great rush and dire need, and there, the effects tend to be rather unrealistic; in Real Life, torture leaves physical scars and mental trauma, and tends to have poor results in terms of getting reliable and accurate information. And some particularly dark Antiheroes may do this for revenge instead of information. If the bad guys don't like getting their hands dirty, they are likely to employ a Torture Technician or Robotic Torture Device to do this for them.

One motive for Better to Die than Be Killed is to avoid this.

Any work that paints The Spanish Inquisition (or their nearest fantasy analogue) as bad guys will often have them engaging in some form of this on people they suspect to be heretics or worse. This general portrayal of the Inquisition is known as the Black Legend.

Compare No-Holds-Barred Beatdown. A "light" sci-fi and fantasy equivalent is the Agony Beam... but if the Agony Beam is set to "Consciousness" expect unpleasant results. But you never know — sooner or later you may find a victim who likes the frights.

See also To the Pain, Electric Torture, Mind Rape, Room 101, Cruel and Unusual Death, and We Have Ways of Making You Talk. If the player is allowed to do this in a video game, see Video Game Cruelty Potential.