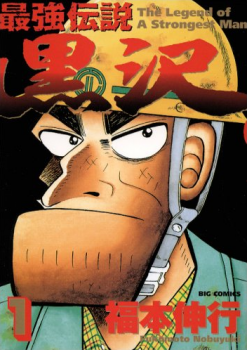 On that day, I realized it...! As if a bolt of lightning struck me, I suddenly realized it. There is no such thing as being emotionally moved!

Strongest Legend Kurosawa (Saikyou Densetsu Kurosawa) is a 2003 manga by Nobuyuki Fukumoto, the man behind Akagi, Kaiji and several others. No, it's not about gambling. Despite that, it's generally seen as one of his best works because of how powerful and philosophical it is. Recently, the main character appeared briefly in the opening video to the second season of Kaiji.

The story is about Kurosawa, a man in his forties who works for a construction company. He is single and experiencing a midlife crisis. All he wants is respect from his co-workers, but things never seem to go the way he wants them to... And one day he has to worry about violent teenagers following him.

Not to be confused with Onani Master Kurosawa or Akira Kurosawa, although the former is a loose parody of this, and the title of this might be a reference to the latter.