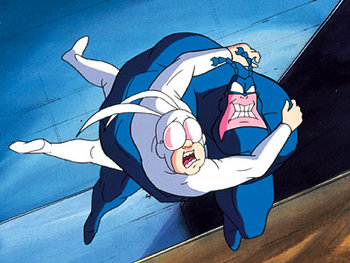 John: They take every chance to lampshade Matt's queerness or lack of traditional masculinity. He's prissily-exasperated in a very period coded-gay way. He's the pansy foil to Basil St. John's mysterious yet alluring swashbuckler.
Josh: I like when Basil shows up in Puerto Rico and is wearing a Zorro mask for no reason.
— The Toast,

What makes Odd Couples odd is that they put together people with conflicting personalities in hopes that hilarity will ensue. A common variant is to have two male characters that are at the opposite ends of masculinity.

One guy will be your everyday Macho Man. He's rough, aggressive, and strong (or at least that's how he sees himself). He loves sports, cars, power tools, and general physical activity. The other guy, in contrast, will be much "softer". He loves poetry, literature, art, and is generally more In Touch with His Feminine Side.

Occasionally these personality traits extend to their looks. The Manly Man will be tall and well-muscled. The "Sensitive Guy", "Tomgirl", or "Girly Boy" will be slender. Anime usually gives him a Bishōnen look while Western production might go for a nerdier one. If the characters are both meant to be attractive, the manly guy will often be a Hunk, and the sensitive one will often be a Pretty Boy.

They may have an Odd Friendship or will be Those Two Guys in an ensemble cast. More frequently they are rivals or even enemies, especially in schoolyard settings. This is because the Manly Man may see the Sensitive Guy as a "wuss" for not displaying stereotypical masculine behavior. Similarly, the Sensitive Guy may resent the Manly Man for perpetuating those stereotypes in the first place. This is very apparent if the two are caught in a Love Triangle as the female will theoretically choose which of them she sees fulfilling the role of "man" best, and they are probably in a male version of a Betty and Veronica dynamic, although who plays each role is relative. Often also used as a way to indicate that works relying on Mars-and-Venus Gender Contrast still have room for more than one stereotype per gender.

These two tend to get into a lot of Ho Yay or Foe Romance Subtext which drives a certain group of fans wild. If they're an actual romantic couple, they'll get Uke and Seme comparisons too. Related to Red Oni, Blue Oni with the Manly Man almost always Red and the Sensitive Guy almost always Blue. Also related to Power Trio with the Manly Man usually the id and the Sensitive Guy usually the superego.

Tomboy and Girly Girl would be their Distaff Counterpart, especially if there's only Two Girls to a Team.

Expect the Action Hero to be a Manly Man and the Action Survivor to be a Sensitive Guy in an Action Duo. May overlap with Bully and Wimp Pairing. Compare Sibling Yin-Yang and Red Oni, Blue Oni. When the Manly Man happens to be a woman it is a case of Masculine Girl, Feminine Boy. Contrast Emotional Bruiser where they combine. Compare with Noble Male, Roguish Male, where the Noble Male is still considered to be "manly" in a chivalrous fashion, and Masculine–Feminine Gay Couple for explicitly romantic duos.

Important Note: While this is usually a straightforward trope, examples can still get subjective in regards to whether or not one of the guys is sensitive enough, the other is manly enough, or whether they're different enough. Keep a few points in mind when editing.