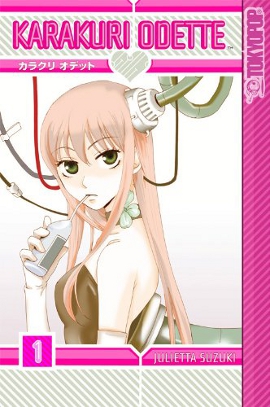 Karakuri Odette is a Shojo Slice of Life manga by Julietta Suzuki (who would later create Kamisama Kiss), which ran in Hana to Yume from 2005 to 2007.

The manga is about the life of Odette, a Robot Girl who wants to know what it's like to be human. In order to pursue her little philosophical quest, she decides to go to high-school. There she meets Asao Kurose, a punk who is known for being a holy terror, and Yoko Morino, a kind girl who quickly becomes her best friend.

Karakuri Odette is of no relation to either Karakuri Circus or Karakuridouji Ultimo.