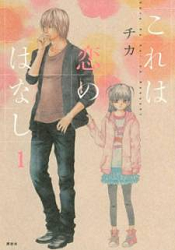 Kore wa Koi no Hanashi ("This is a Love Story") is a manga created by Chika, which was serialized in the shoujo magazine ARIA from 2010 to 2014. It depicts the love story blossoming between a writer and a young schoolgirl and a 21-year age-gap between the two.
Advertisement:

Utsumi Shinichi, a writer whose fame came on by a stroke of luck, has recently moved into his grandmother's house in the countryside to get away from things and focus on writing. The whole story begins, when Morimoto Haruka meets him and asks if she can take care of a stray cat in his front yard. Allowing her to do so, Shinichi and Haruka slowly begin to strike up an acquaintanceship that eventually becomes a friendship.

The story follows their daily life, how Haruka becomes a regular at Shinichi's house and interacts with his friends, taking care of the housework. The manga spans across several years, covering Haruka's time in middle school and high school. Kodansha USA announced an English digital release of the series, but so far the English version has yet to be released.