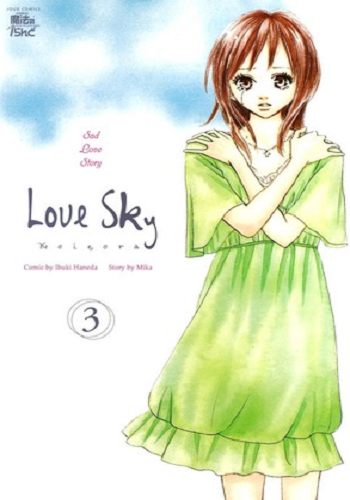 Koizora: A Sad Love Story, or known as Koizora for short, is a cell phone novel written by Mika and published in 2005 on the website Maho no iLand. The novel received a print publication in 2006 and was split into two volumes. During its serialization, Koizora amassed widespread popularity and was considered a cultural phenomenon in Japan, as approximately 20 million people subscribed to the story and over two million copies of the book was sold.
Advertisement:

Part of the reason to its popularity is because of Word of God claims it's biographical, and her anonymity makes the events of the story believable. This has been Retconned as being Very Loosely Based on a True Story, though there are rumors going on that it's Based on a Great Big Lie due its exaggerations and suspiciously strategic emotional appeal. Nevertheless, the success of Koizora led to a manga adaptation drawn by Ibuki Haneda, a theatrical film starring Yui Aragaki and Haruma Miura, and a television drama starring Erena Mizusawa and Koji Seto.

The story follows young Naïve Everygirl Mika Tahara, a girl who daydreams of love. Through a random encounter of phone calls, she meets Hiroki "Hiro" Sakurai, a delinquent boy who she is initially afraid of, and the two gradually fall in love. Do they live Happily Ever After? ... Not exactly, when challenges in their lives pop up and threaten to split the couple apart, including a sociopathic ex-girlfriend, an unplanned pregnancy, and the possibility of death. There's a lot of Tear Jerker moments, so get your tissue boxes ready.