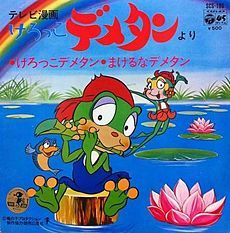 Kerokko Demetan is an anime produced by Tatsunoko Production that aired from January 2 to September 25, 1973 on Fuji Television.

The series focused on Demetan, a tree frog who moved with his family to Rainbow Pond, where he fell in love with Ranatan, daughter of the leader of the pond. Due to being a tree frog, he and his family were outcasts in the community, and he and Ranatan spend the series trying to fight for change in Rainbow Pond.

The series was very popular in Japan and is still one of the country's best-loved nostalgic anime. In 1982, a decade after it originally aired, the series would be rerun on TV Tokyo as a last-minute replacement for the cancelled Don Dracula.

In English, however, the series was turned into two movies, The Brave Frog and The Brave Frog's Greatest Adventure, both produced by Harmony Gold (the latter being released only in the UK). They also produced a dub of the TV series, Adventures on Rainbow Pond, but little of that exists. However, Canada did get the entire series in French on Radio-Canada in the '80s.