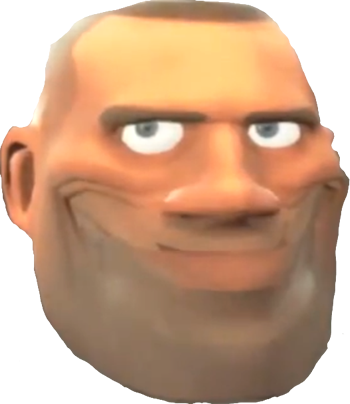 The closest representation of RubberFruit that can be shown without the use of copious drugs.
"Mine!"
Advertisement:

There are quite a few talented Garry's Mod artists and video-makers out there. In the past these people used it to recreate notorious works, make humorous montages and, of course, show off their new contraptions or pieces of LUA scripting.

And then, by the time stop motion was getting popular with Garry's Mod, there's YouTube user RubberFruit

, who's talented in a...different way.

RubberFruit's videos tend to contain random stuff happening (but whereas things like The G Mod Idiot Box are composed of clips, these videos take place in the span of one single clip), Deranged Animation (as a result of the Inflate tool and the HWM models that come with Team Fortress 2), and nostalgic music from older Nintendo properties (in particular, the Donkey Kong series). The most famous of his creations being of course Painis Cupcake.

RubberFruit, on December 2011, stopped making videos altogether due to getting bored with Garry's Mod and getting sick of his subscribers, but he eventually returned in the wake of the release of Source Film Maker. He would then cease production on his channel again in October 2013, and has not been seen since.