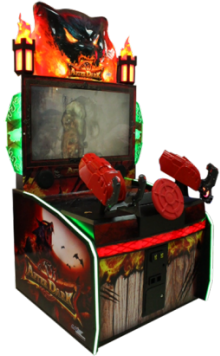 After Dark is an arcade game made by UNIS (Short for Universal Space) released in 2013.

The game sees you play as two monster hunters after the bounties on monster terrorizing the countryside lead by a friar name Carl as the brave the supernatural dangers for fame and glory.

Many have compared the game to Namco's Deadstorm Pirates and it wouldn't be too far off the map when playing it as it has many of the control scheme such as similar enemy type and even a wheel for where you need to steer out of harm's way. Regardless, the theme of the game does help alleviate the similarities and not be too much of a copycat.

After Dark has the following tropes: