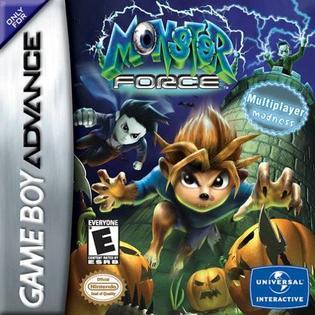 Monster Force is a 2002 video game for Game Boy Advance developed by Digital Eclipse Software and published by Universal Interactive.

The story begins with three young monsters named Frank, Drac and Wolfie, who return from a night of fun to discover their creator Dr. Victor Frankenstein missing and his lab destroyed. The trio then go on a journey to find their creator's brother Dr. Percy Frankenstein.

Not to be confused with the cartoon of the same name featuring Universal Horror characters. For that, see Monster Force.

Tropes displayed in this game include: