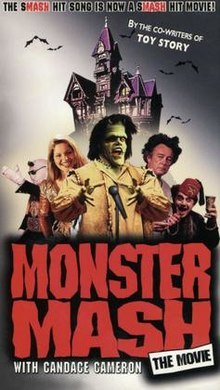 Monster Mash: The Movie was a film adaptation of Bobby "Boris" Pickett's hit song The Monster Mash and Pickett's stage musical I'm Sorry the Bridge Is Out, You'll Have to Spend the Night, produced by The Greenhouse Film Group Ltd. and distributed by Turner Home Entertainment.
Advertisement:

Two teenagers named Scott and Mary are on their way to Halloween party. When their car breaks down, they find themselves at the castle (and party therein) of Dr. Frankenstein, who quickly begins plotting to put Scott's brain into his monster. Unfortunately for him, all his other guests have their own plans for the young duo. Hilarity (and many catchy musical numbers) Ensue.

For the animated film based on the song, see Monster Mash (2000).