Video Game / You Are Not The Hero 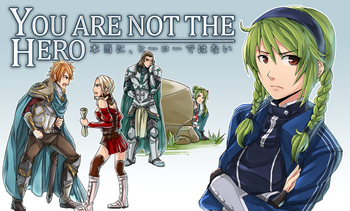 In the average RPG, you can casually enter peoples' homes, break valuable objects for what's inside, and take their stuff, and they'll be totally okay with it.

Well, not this time. In fact, Petula is PISSED that the heroes did just that. They made off with a pendant of hers, and she wants it back. And no matter how far she has to go, she will catch up with those heroes and get it back.

You Are Not The Hero is a game by ToMorning Productions. It was funded on Kickstarter on October 15th, 2013, just three days after its launch. It was released on Steam on June 2nd, 2015.

You Are Not The Hero contains examples of: