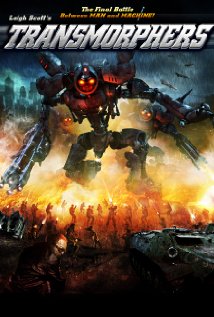 In 2009, life was discovered on another dying planet. We sent them sent messages of peace and friendship. Unfortunately for us, they're not so friendly after all.

Released as a cash-in on the (then new) Michael Bay Transformers film and further taking cues from the Terminator and The Matrix franchises. Transmorphers, directed by Leigh Scott, is a 2007 film released by The Asylum.

The film focuses around what happened after the above-mentioned invasion 300 years later. A small, underground resistance group has decided to take action against the robots and reclaim the Earth. Which has since become shrouded in a permanent darkness created by said robots in order for them to live.

A prequel, entitled Transmorphers: Fall of Man was released in 2009. Around the same time as both Transformers: Revenge of The Fallen and Terminator Salvation and also taking cues from Maximum Overdrive. It goes into more detail about how the Transmorpher invasion started.

Tropes associated with Transmorphers and its prequel: