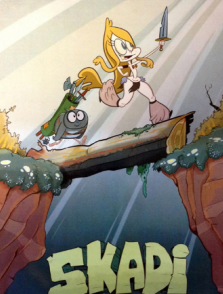 "I sing this song, it is not long,
Her tale... it must be told!
From the North, she wandered forth,
'Tis SKADI! Strong & bold!
Her quest, it's said, her feet will tread -
A journey! Never ceased...
Until she's beaten, quelled & eaten,
The hide of every Beast!"
Advertisement:

is a fantasy webcomic by Katie Rice and Luke Cormican (both professional animators who have worked on things like El Tigre and Teen Titans Go!)

The story follows the titled barbarian warrior, Skadi, who was kicked out of her tribe when she mistakenly attacked her father thinking he was a beast, causing him to believe she had turned cannibal.

Banished, Skadi decides to go on a quest to prove herself and eat every beast on her checklist. Joining her on her journey is Diseasoid, a odd furry beast that unwillingly gives off plagues that Skadi makes into a slave. Together the two fight adversaries, slay beasts and, in Skadi's case, just be unrepentantly unpleasant to everyone she meets while causing disasters in the process.

The comic was hosted on both its own website and Dumm Comics (although it was revealed that it would be leaving the latter site due to personal matters from the author). The original web domain was shut down, but the comic can still be found on the latter. While it hasn't exactly ended per se, it did conclude its final story arc and went into hiatus in May 2016, with Katie promising that she would come back to it in the future after pursuing other ventures.

Skadi has the following tropes: