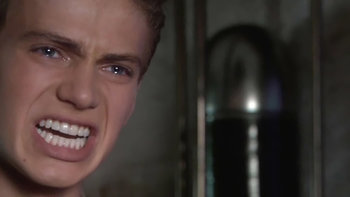 Ladies and gentlemen, the man who will become Darth Vader!
"'George, you can type this shit, but you sure as hell can't say it."
— Harrison Ford to George Lucas after reading his lines for A New Hope.
Advertisement:

The galaxy far-far away is not just full of diverse planets, colorful species, creatures and people of all kinds, but also plenty of failed dramatic moments that just come off as funny. See the Narm Charm page for that trope.

All spoilers are unmarked! You Have Been Warned!

The Phantom Menace
Attack of the Clones
Revenge of the Sith
Solo
Advertisement:
Rogue One
A New Hope
The Empire Strikes Back
Return of the Jedi
The Force Awakens
The Last Jedi
The Rise of Skywalker