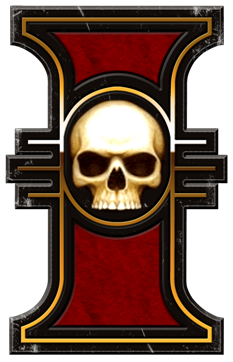 There is no such thing as innocence, only degrees of guilt.
Advertisement:
One cannot consider the fate of a single man, nor ten, nor a hundred, nor a thousand. Billions live or die by our actions, and we have not the luxury to count the cost.
— Inquisitor-Lord Kryptman

In Warhammer 40,000, the Holy Orders of the Emperor's Inquisition (referred to as simply the Inquisition) are the men and women whose task is to police all aspects of Imperial culture, rooting out threats that are not necessarily military in nature but which threaten the very structure of the Imperium.

State Sec with a side of Church Militant, Inquisitors are some of the most powerful individuals in the Imperium, working behind the scenes to keep everything from going (further) to Hell. They can command civil authorities, the Imperial Guard, the Navy, agents of the Officio Assassinorum, even the Astartes (though they are wise enough to tread carefully in the last case, usually requesting their help instead of just ordering them around). They have the power of Judge, Jury, and Executioner over individuals or whole worlds. They are fully competent in the Jack Bauer Interrogation Technique, using any method possible to root out the Imperium's enemies, though their readiness to use the "Nine Actions" varies greatly. Though presented as a unified if extremely intimidating front to the Imperium at large, in reality the Inquisition is a hotbed of backstabbing and intrigue, as patient detectives rub shoulders with frothing religious zealots, Puritans hunt Radicals foolish enough to try and turn the weapons of the enemy against them, and a variety of philosophical outlooks struggle amongst themselves for dominance.

The Inquisition is divided into three major orders, called Ordos, and a larger number of minor orders; the vast majority of Inquisitors seen in the fluff belong to one of the major orders. Each Ordo is tailored to combat a specific preferred enemy and has a Chamber Militant best suited for fighting that enemy:

The large scale miniature RPG Inquisitor also introduced the concept of Inquisitorial philosophies to justify and explain Inquisitor vs. Inquisitor in-fighting. The philosophies usually differ in what the ultimate 'goal' of defeating heresy is and what methods are most appropriate to accomplish it: Puritans believe strongly in following official Imperial doctrine, while Radicals believe that the greater goals justify diverging from principle. Philosophies aren't set in stone and Inquisitors are known to slide from one to another over the course of their careers.

Although they receive most of their focus in the background material and the Specialist Game Inquisitor, the Inquisition have had rules in the main Warhammer 40,000 game since its 1st Edition, when they consisted of nothing more than regular Inquisitors and the secretive Ordo Malleus. The organisation received their first two codices, Codex: Daemonhunters and Codex: Witch Hunters, during the 3rd Edition of the game where they were listed alongside the Grey Knights and the Adepta Sororitas respectively. The 6th Edition of the game saw the release of the digital-only Codex: Inquisition, their only solo sourcebook to date. During 7th Edition the rules for the Inquisition were included in Codex: Imperial Agents alongside the other smaller Imperial sub-factions. The 8th Edition Inquisition rules were included in the Index: Imperium 2 sourcebook released in June 2017 before being updated in the Index Imperialis: Inquisition article published in the November 2019 issue of White Dwarf.

Inquisitors of the Amalathian creed work towards Imperial unity and are staunch defenders of the status quo.

The Thorians are the latest Resurrectionist faction to become prominent within the Inquisition. Inspired by the achievements of Sebastian Thor in ending Goge Vandire's tyrannical Reign of Blood, they believe that the Emperor works through mortal agents, and that with some work, He can be returned to mortal flesh. They have two Puritan sub-factions: the Anomalian Beholders, who want to wait for the Emperor's return rather than attempt to bring it about, and the Ardentites, who believe that the Emperor will work His will through all humanity, rather than specific individuals. There are also three Radical Thorian offshoots; Casophilians (focused on studying how to draw deceased souls back from the Warp), Horusians (see the Radicals folder) and Revivificationism (study death and dying in hopes of learning how to reverse the process and ultimately revive the Emperor).

The least subtle Puritan faction, the Monodominants believe that the Imperium is the only thing that deserves to survive. They tend towards the least subtlety possible in pursuit of their goals, generally trampling over everything in their path, which often annoys more subtle Inquisitors, such as everyone.

The Xanthite faction is the face of Radicalism in the Inquisition, dedicated to turning the power of Chaos back against itself. They tend to have a low success rate.

The Recongregationists believe that the Imperium has become corrupt and stagnant, and must be rebuilt. Naturally, being Inquisitors, their approach to this tends to be a bit intense.

The Istvaanians believe that the Imperium attains its greatest power in times of crisis, pointing to events like the Horus Heresy. As a result, they tend to act to bring about war and mayhem in order to strengthen the Imperium — while also reinforcing Imperial forces.

Horusians, like Thorians, believe that the Emperor of Mankind needs to be brought back into the flesh. The big difference is that the Horusians want to use the power of Chaos to create an avatar of the Emperor, while the Thorians would prefer exactly not that.

One of the more minor Radical factions, the Ocularians believe that the Imperium must master the art of precognition, and that by learning how to successfully divine the future they can also change it to better suit their desires. A subgroup, the Antiquarti, believes that mastering precognition also requires mastering postcognition, and so they study the past in an effort to be able to better recognize the shape of things to come.

A Radical Faction rooted in the Ordo Malleus, the Plutonians believe that the best way to create warriors who can battle the forces of Chaos is by using warriors who have been possessed and then successfully exorcised. They are the secret patrons of a chapter of Space Marines called the Exorcists, who they use to put their theory into practice.

Believing that humanity's destiny is to evolve into a naturally psionic species, similar to the Eldar, Inquisitors of the Polypsykana faction strive to protect psykers from abuse by the more anti-psyker elements of Imperial society, to find ways to protect psykers from daemonic influence, and to awaken psionic abilities in a wider swathe of the human population.

Possibly a splinter sect of Recongregationism, inquisitors of the Seculos Attendous believe that the Ecclesiarchy and the Imperial Faith are active detriments to humanity's survival, and that their influence over the Imperium must be curtailed for the good of the Imperium.

A Radical faction from the Ordo Xenos, the Hybris believe that not all aliens are evil and the Imperium would actually be better served by actively allying with non-hostile races so they can pool their collective strengths against real threats, like orks, tyranidds or Chaos.

For information about literary adventures of Gregor Eisenhorn, Gideon Ravenor, and Amberly Vail, see their respective links. Other Inquisitors of note include: 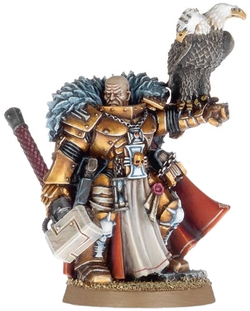 There are amongst our Ordo who say that I seek advancement for my own purposes, and they are correct. My purpose is to destroy the daemonic and if I must rise to command an entire sector to do so, then so be it. I am a servant of the Emperor and only those who consort with Warp-spawn need fear my ambition.

A fanatical member of the Ordo Malleus, Torquemada Coteaz is single-minded in determination in eradicating the daemonic threat to the Imperium. The most prominent member of the Inquisition in the Formosa Sector, Coteaz has an extensive network of followers, informants, spies and henchmen that keep him informed about everything that goes on in his sphere of influence. Due to his advancing years, Inquisitor Coteaz is becoming increasingly worried that he will die before fulfilling his duty, and has begun taking an increased interest in almost any method that could extend his lifespan. 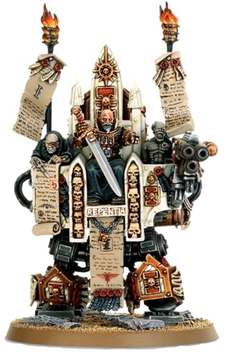 A ruthless and feared member of the Ordo Hereticus, Fyodor Karamazov is an ardent follower of the Amalathian philosophy, believing that any deviation from the Emperor's plan for humanity is worthy of sanction. Holding court from his intimidating Throne of Judgement, the uncompromising Karamazov has left a trail of burning heretics across half the galaxy. 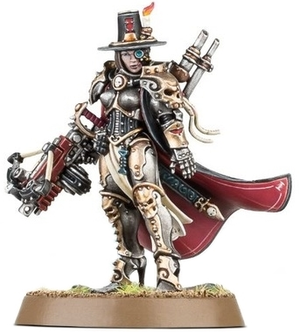 Faith. In the right hands, it is Humanity's greatest weapon. Yet even the finest blade is rendered fallible by its wielder. In the wrong hands, the mighty sword of faith can do more hurt to the Emperor's realm than can all the treacherous Daemons of the Warp combined. This is why those who profess to be the most holy amongst us must be put to the sternest test.

Katarinya Greyfax is a member of the Ordo Hereticus and a powerful psyker who had been imprisoned within the collection of Trazyn the Infinite for many years. Released to aid the defence of Cadia against Abaddon's 13th Black Crusade, Greyfax was one of the handful of survivors to retreat from the doomed planet. Travelling to Ultramar with the other survivors and the xenos Ynnari, Greyfax was present for the resurrection of the Primarch Roboute Guilliman and accompanied him on his Terran Crusade. Since the opening of the Great Rift, Greyfax has continued to fight in defence of the Imperium and undertake important missions on behalf of the reborn Primarch. 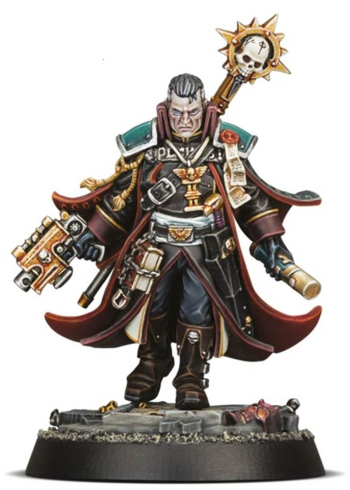 An Inquisitor of the Ordo Xenos, Gregor Eisenhorn began his career as an Amalathian Puritan, only to slowly develop into a Radical Xanthite and has been declared a renegade at least three times. A powerful psyker and a competent warrior, Eisenhorn fights the enemies of the Imperium as he sees fit. 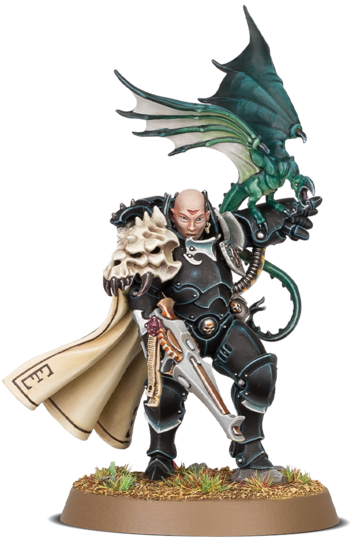 A great silence has fallen. A moment of still terror as the universe prepares for death. Our darkest hour grows ever darker. And in the battle ahead, there will be no blood to mark our passing. Just the husks of men and women reduced to...Nothing. We must marshal what strength remains. We must trust in the armour of faith. We must deafen the stars with our wrath. Lest we fail, and humanity falls to a final silence.

A radical Inquisitor of the Ordo Xenos, Kyria Draxus came to prominence after the opening of the Great Rift and believes that the awakened Necrons are just as much of a threat to the Imperium as the rise of Chaos.

End of the Page? HERESY!