Characters / If the Emperor Had a Text-to-Speech Device

While many a character comes from the canon of Warhammer 40,000, the series gives them a... unique spin at times. Every spoiler up to Episode 25 (the last episode before the podcasts and spinoffs start) is left unmarked.

Cypher, Lord of the Fallen 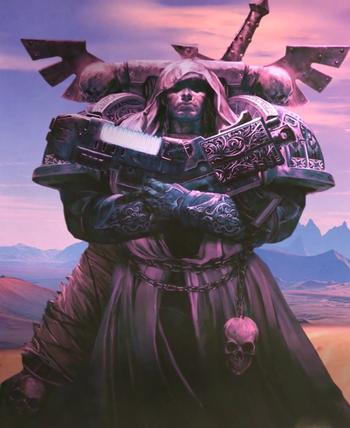 One of the most mysterious traitors of the Fallen Angels, a man who has eluded the Dark Angels for millenia and avoided capture ever since. He is currently plotting... something that involves a planet of ancient tech, the Mechanicus, and a free ride on the Dark Angels' ship. The reasons for this are currently unknown.

An insectoid Xeno race from beyond the galaxy that has one single goal in mind for the countless planets they have come across — to devour everything in sight and to adapt and evolve in every possible way.

An extremely dangerous breed of Tyranid first encounter at the Battle of Macragge, leading their innovation, which nearly destroyed the Ultramarines.

Mephet'ran the Deceiver, the Jackal God 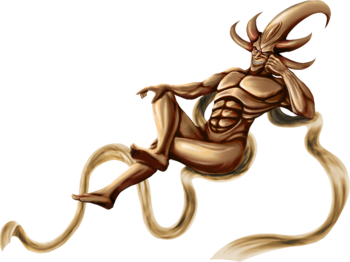 The oldest player in this whole game.
Voiced by: Haven Kendrick

The C'tan known as the Deceiver, one of the most powerful among them all and definitely the most clever. Even in his weakened form he continues to plot and scheme behind the scenes, but it's become clear to him that current events call for drastic measures.

The Bellyscratch Coalition of Good Lads

Kitten's empire, an egalitarian, xenophile, pacifist federation and pretty much the only ones who don't engage in constant war.

The Supreme Kingdom of Humanity

Big Emps's empire and his vassals, more or less recreating the Imperium as it was during the Great Crusade.

The Trust of Trustworthy Fellows

The Undeceitful's Empire. While one of the largest empires in the game, the Undeceitful seems content to just help out his allies. Surely this kindly and trustworthy fellow has no ulterior motive whatsoever.