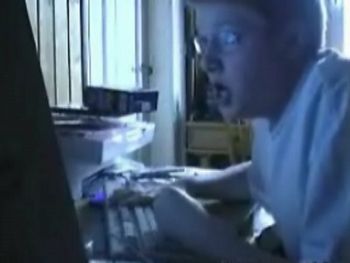 Angry German Kid, also known as Crazy German Kid, Crazy German Guy, PC Lunatic, Keyboard Crusher, and a plethora of other names depending on the reupload, is amongst one of the most well-known videos on the internet.

The video depicts a German teenager (dubbed "Leopold Slikk") throwing a massive tantrum whilst playing Unreal Tournament 2004 on his computer. He starts out by shoving aside the clutter on the desk, and then pounds the keyboard & mouse and yells at the computer to start, because he wants "TO PLAY THIS FUCKING GAME!!!!!". When it does start, he cackles insanely, before screaming as he embarks on a shooting rampage, and then picks up the keyboard and bashes it against the desk when he wins. Suffice to say, several keys disconnect and he fumbles around trying to stick them back in. During this, he gets killed, prompting him to howl with rage, pick the keyboard up and bash it against the desk again, before finally throwing it down, getting out of his chair and leaving.

Has to be seen to be believed. Everyone should watch it at least once. Chances are, if you're on this wiki, that you've already seen it, but if not, here's one version

The video was confirmed to be a parody (as shown here

by Cracked). "Leopold" (real name Norman Kochanowski) was simply an actor, parodying that video games cause outrages similar to the ones in the video.

There are countless versions of it; some with English subtitles, some without; some with Gag Subs; plus many, many parodies.

Now has an RPG based off of Angry German Kid himself. It can be downloaded and has a hefty size of 380MB.

In addition, the parodies provide examples of: