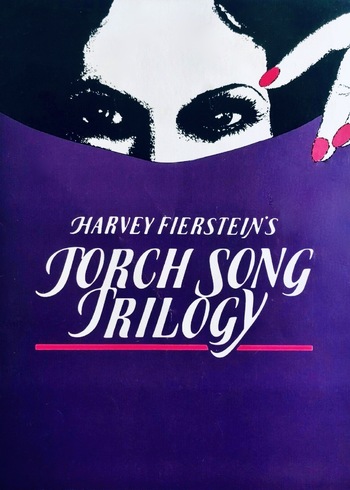 Torch Song Trilogy is a groundbreaking gay theatre piece by Harvey Fierstein. Fierstein wrote the three plays to give himself acting work, and he became a famous writer accidentally. The three plays included were each written and produced separately, at La Ma Ma, etc. in New York in the '70s, before coming to Broadway in 1983. The three plays have radically different styles, but all of them concern a character named Arnold Beckoff, and his on-again-off-again relationship with his bisexual lover Ed.

Since the plays were originally done stand-alone, the full evening runs close to four hours.On Broadway it won the 1983 Drama Desk Awards for Outstanding New Play and Outstanding Leading Actor and the 1983 Tony Awards for Best Play and Best Actor for Harvey Fierstein, and the Theatre World Award. Producer John Glines' Tony speech was historic for acknowledging his male lover and co-producer, Larry Lane.

A film adaptation was made in 1988, with Fierstein starring and writing the screenplay adaptation. It co-starred Matthew Broderick (who'd played David in the original production) as Alan and Anne Bancroft as Arnold's mother.