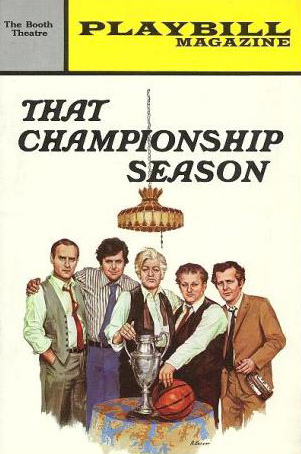 That Championship Season is a 1972 American stage play written by Jason Miller (also known for playing Father Karras in The Exorcist), which won both the Pulitzer Prize for Drama and the Tony Award for Best Play in its first year of performances.

In 1952, the basketball team of Fillmore High, a small Catholic high school in Scranton, staged an upset victory in the final of the Pennsylvania State High School Basketball Championship. Four of the players — George Sitkowski, Phil Romano, and brothers James and Tom Daley — have held annual reunions ever since with their coach (only ever addressed as "Coach") at his house on the anniversary of their victory. The fifth player, Martin Rose, has refused to attend any of the reunions and wants nothing to do with Coach or his former teammates.

Twenty years later, George is a first-term mayor of Scranton fighting a tough re-election campaign against Norman Sharmen, who is younger, more dynamic, and, most galling of all for the bigoted George and his teammates, Jewish. A campaign publicity stunt has gone badly wrong, enhancing the view of both the voting public and his own campaign that George is a buffoon. Phil is a wealthy strip mining entrepreneur who has been donating to George's campaigns in exchange for favourable terms on the land lease for his mining operations; unbeknownst to George, he is also having an affair with his wife, Marion. James is the overworked and underpaid principal of a local junior high school and is George's campaign manager, hoping to be named superintendent of schools if George is re-elected. Tom has become an alcoholic drifter.

At the reunion, the tensions between the former basketball players quickly simmer to the surface. Coach hates dissent in the ranks, feeling it weakens the team dynamic, and tries to rally them as he has done for twenty years, but he can only speak in pep talk platitudes, addressing them as though they are still a basketball team in the middle of the big game, and it is clear that the players' overreliance on his trite guidance is a significant cause of their current unhappiness. James tells George about Phil's affair with Marion, while Phil tries unsuccessfully to abandon the sinking ship of George's campaign by calling Sharmen to offer a donation in exchange for preserving the favourable terms of his lease. James is also outraged to discover that George is bringing in a new campaign team from Philadelphia to salvage his chances for re-election. Tom spends the evening getting more and more drunk and lashing out at everyone in turn, culminating in revealing just why the absent Martin hates Coach and has never attended a reunion.

The play has been adapted for the screen twice, both using scripts written by Jason Miller; once directed by Miller for The Cannon Group in 1982 with Robert Mitchum as Coach and Paul Sorvino (reprising his role from the original stage run), Bruce Dern, Stacy Keach, and Martin Sheen as the players, and once for television in 1999 with Sorvino (who also directed) now playing Coach and Vincent D'Onofrio, Tony Shalhoub, Gary Sinise, and Terry Kinney as the players.