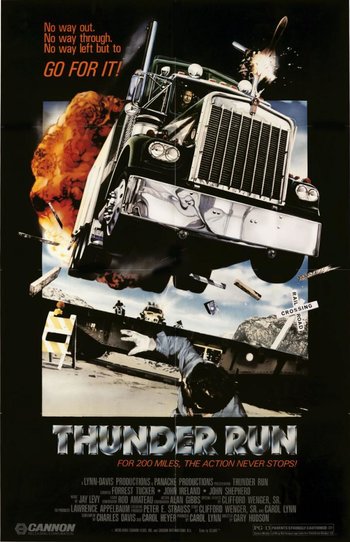 For 200 miles, the action never stops.

Thunder Run is a 1986 action-thriller by The Cannon Group, directed by Gary Hudson and starring Forrest Tucker in one of his last film roles before his death on October 25, 1986.

Charlie Morrison (Tucker) is a Korean War veteran and retired truck driver, who now runs an old cobalt mine in Nevada with his wife Maggie (Marilyn O'Connor), and his grandson Chris (John Shepherd), whom they have been raising since the death of their daughter. However, the mine isn't doing very well in business. Meanwhile, a group of terrorists are constantly trying to steal plutonium being transported to a high-security research operation in Arizona. George Adams (John Ireland), an old war buddy of Charlie and now a government agent, offers Charlie $250,000 to transport the plutonium, offering him $50,000 in advance. For the run, Charlie buys a semi-truck and customs it with the help of Chris, his friend Paul (Wallace Langham) and their girlfriends Kim (Jill Whitlow) and Jilly (Cheryl M. Lynn).

He can't, because while making the jump, his Baja Bug flips and explodes.