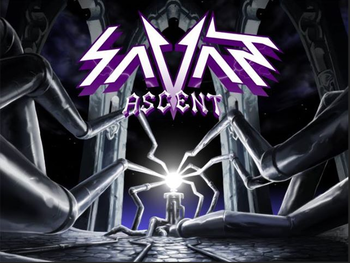 Savant: Ascent is a shooter created by Dubstep creator Savant, much in the same vein that Zun created Touhou Project. Taking control of a man simply dubbed "The Alchemist", you must scale your tower after a mysterious orb has blasted you from your home. That's about as much plot as the game will tell you. Savant Ascent is a sort of twin stick shooter. You aim and shoot with the mouse button and move with the wasd keys, but there is a catch. The player doesn't have free control of the Alchemist's movement; rather, they simply control which platform he is on and how he gets to the other one if he needs to move. Another important part of the game is collecting CDs. No literally, you collect CDs of Savant's songs to gain new powers. And you are gonna need them.
Advertisement:

As of October 22, 2014, the game was given the Void Update, adding two new levels (one of which is the game's Bonus Boss) and a new CD. A temporary update also gave access to Christmas mode which ended on January 1, 2015.