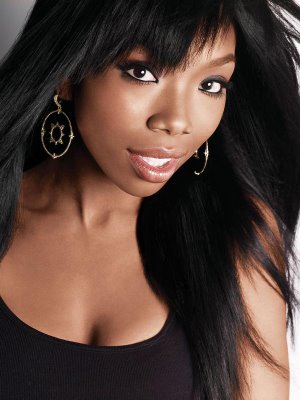 Born into a musical family in McComb, Mississippi and raised in Carson, California, she enrolled in performing arts schools as a child and performed as a backing vocalist for teen groups. In 1993, Norwood appeared in a supporting role on the short-lived ABC sitcom Thea and signed with Atlantic Records. The following year, she released her self-titled debut album; singles "I Wanna Be Down" and "Baby" peaked atop the Billboard Hot R&B Singles chart. Norwood starred in the successful UPN sitcom Moesha in 1996, which lasted six seasons and resulted in roles in the horror sequel I Still Know What You Did Last Summer (1998) and the TV films Cinderella (1997) and Double Platinum (1999). She resumed her music career in 1998 with the widely successful duet with Monica, "The Boy Is Mine" and her second album Never Say Never.

Throughout the 2000s, Norwood experienced career and commercial turbulence. In 2002, she starred in the reality series Brandy: Special Delivery. Her third and fourth albums, Full Moon (2002) and Afrodisiac (2004), were released to commercial success. She served as a judge on the first season of America's Got Talent in 2006.

Then, she was involved in a tragic widely-publicized car accident later that year, which led to the death of a female driver. Brandy was accused of rear-ending the woman's car and was charged with vehicular manslaughter. After several lawsuits stemming from the accident, Norwood's career and life went into freefall. However, in early 2008, Brandy was found not at fault for the car crash and both the charges and lawsuits were dropped. Norwood's fifth album Human was released later that year. In 2010, she returned to television as a contestant on the eleventh season of Dancing with the Stars and starred in the reality series Brandy & Ray J: A Family Business with younger brother Ray J. She began a recurring role on both Drop Dead Diva and The Game (2006) in 2011 and released her sixth album Two Eleven the following year.

Within pop music, Norwood has become known for her distinctive sound, characterized by her peculiar timbre, voice-layering, throaty riffs, and beat-driven R&B. She has since been signed to both Epic Records and RCA Records, where she has acquired a catalogue of hits with singles such as "What About Us?," "Full Moon," and "Put It Down" being her most successful. She has sold over 8.62 million copies of her first five studio albums in the United States, and over 30 million records worldwide. Her work has earned her numerous awards and accolades, including a Grammy Award, three American Music Awards, and seven Billboard Music Awards.

She is considered Monica's Lighter and Softer counterpart, and shares a Friendly Rivalry with her. Her younger brother Ray J is also a singer/entertainer and she is first cousin to rapper Snoop Dogg and wrestler Sasha Banks.