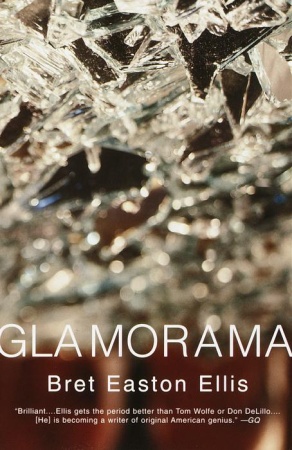 "The better you look, the more you see."
"Basically everyone was a sociopath... and all the girls' hair was chignoned."
Advertisement:

Glamorama is a 1998 novel by Bret Easton Ellis.

If someone wanted to be glib about the plot of Glamorama, they could say, "It's like the movie Zoolander, but played straight." But they'd only be about 25% correct.

Glamorama stars Victor, the mostly absent Europe-roaming boyfriend of Lauren's in The Rules of Attraction, as a somewhat vapid and completely solipsistic fashion model. He's risen to a level of fame and fortune; at the beginning of the novel, he's opening an extremely chic nightclub that promises to garner a large celebrity turnout. Victor is dating supermodel Chloe Byrnes while banging Alison Poole (who is dating the nightclub owner and Victor's business partner/boss) while doing a ton of drugs and chugging a ton of booze. Then Victor meets the strange and vague F. Fred Palakon, a man who offers him $300,000 to track down a former classmate of his, Jamie Fields. Victor takes the job and eventually finds Jamie and before he fully realizes it, he is waist-deep in the bizarre and violent happenings of an international terrorist group made up entirely of fashion models.

The book is a pitch-black Satire of celebrity culture with a dollop of Gorn and side of Meta Fiction. It embraces several Ellis hallmarks (drugs and booze galore, disaffection, meaningless sex), but offers some departures from the usual Ellis fare.