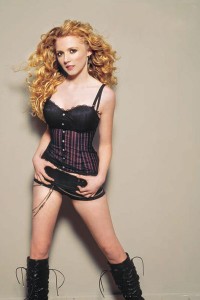 Nicole Marie "Nikki" Webster (born April 30, 1987 in Sydney, Australia) is an Australian pop singer, actress, dancer, businesswoman and Former Child Star who is best known for performing to an audience of billions during the Opening and Closing Ceremonies of the 2000 Sydney Summer Olympics. For anyone who only vaguely remembers the events, she was the little red-haired girl who appeared in the dream sequence, "swimming" with fish (with the help of a harness), getting caught up in Aboriginal festivities and the like. She also sang the songs "We'll Be One" and "Under Southern Skies" while standing in front of the Olympic Flame.

She went on to have a promising pop career, with her single "Strawberry Kisses" peaking at #2 on the ARIA singles chart, eventually going Platinum. After a year-long stint playing the part of Dorothy in the 2001-2002 run of The Wizard of Oz (1902) stage show, she released two albums, Follow Your Heart and BLISS. The first was certified Platinum, the second Gold. However, her third album, an album half-full of covers entitled Let's Dance, only barely peaked within the Top 50 of the albums chart and received no certification.

Her later career has included her competing in the Australian version of Dancing with the Stars, guest-starring as an ensemble member on the improv comedy show Thank God You're Here and playing the role of Sheila in the musical Hair. In 2006 she sought to discard her former "good-girl" image by appearing in a sexy photoshoot for the Australian edition of FHM. She followed this up by performing as a wind-up doll at the Sydney gay and lesbian dance party Sleaze Ball and releasing a single, "Devilicious", that dealt with her newfound sexual image.

She opened her own dance school, Dance @ Nikki Webster, in 2008. Two branches are in Sydney itself while one is on the Central Coast of NSW.

In 2019, she was a contestant on the Australian version of The Masked Singer, in costume as The Alien.

She also has two kids of her own. Feel old yet?