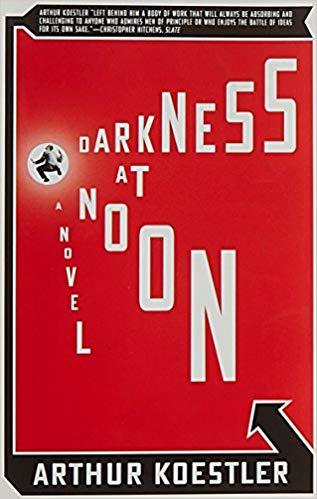 Darkness at Noon is a 1940 novel by Arthur Koestler. The story is set in the Soviet Union during Joseph Stalin's Great Purge in the 1930s. None of this is identified explicitly; the country is only referred as "the Country of the Revolution", the Communist Party as "The Party" and Stalin as "Number One". Koestler, who used to be a Communist, expressed his disillusionment with the movement through the novel. Darkness at Noon is considered to be one of the most influential anti-Soviet books ever written.

The protagonist is Nicholas Salmanovitch Rubashov, a veteran of the Revolution. He was one of the delegates to the first congress of the Party, captured in a photograph that used to hang on many walls. Of the bearded heads numbered in that photograph, only "No. 1" and his belated predecessor still remain in the Party's favor; the rest are being liquidated one by one. Rubashov had been in jail many times before, and even dreamed of being woken up and arrested in the middle of the night, but he did not dream that it would be the People's Commissariat of the Interior who would be arresting him.

In prison, Rubashov is interrogated by two men: Ivanov, a cynical old friend from Revolutionary days, and Gletkin, a fanatical young Party member. Rubashov is offered the choice of an administrative trial or public trial. This means either die in silence, or confess in a show trial to criminal activities which he did not commit. As he ponders which course of action is more honorable, he reflects on his past life, which he had dedicated to the service of the Party and thinks about the immoral things he has done in the name of a better future.

Sidney Kingsley adapted the novel into a Broadway play in 1951 starring Claude Rains, who won a Tony Award for playing Rubashov opposite a young Jack Palance as Gletkin.