Literature / A Death in the Family 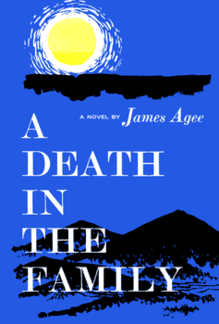 It is a slice-of-life tale about, well, a death in a family. Jay and Mary Follett are married and parents of two, six-year-old Rufus and his four-year-old sister Catherine. Jay gets a call from his brother Ralph that their father is dying. Jay knows that Ralph is sort of an idiot and definitely a drama queen but he rushes off anyway. Sure enough, it's a false alarm...but on the way home, Jay wrecks his car and dies. The rest of the novel deals with the immediate aftermath of Jay's death, and how it impacts the rest of the family, ending with the funeral.

A Death of the Family is Agee's autobiographical novel of the death of his father when Agee was six. (James Agee's childhood nickname was "Rufus".) It was later adapted into a stage play, All the Way Home.

No connection to the Batman comic book story, "A Death in the Family".