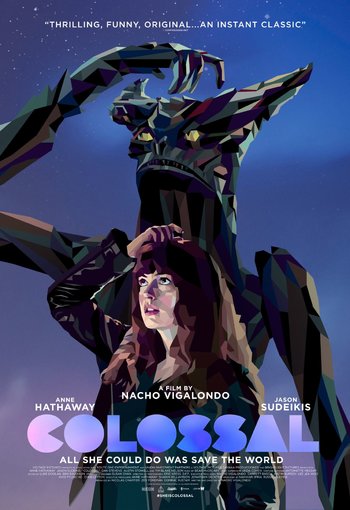 There's a monster in all of us.
Advertisement:

Colossal is an American-Canadian-Spanish Kaiju Sci-Fi Action-Thriller Comedy film directed and written by Nacho Vigalondo. It premiered on September 9, 2016 during the 2016 Toronto International Film Festival and received a formal release on April 7, 2017.

Meet Gloria (Anne Hathaway). She is not having a good time. She lost her job, which made her lose her boyfriend Tim (Dan Stevens). Hoping to make a fresh start, she moves back to her hometown. When she gets there, she meets up with her childhood friend Oscar (Jason Sudeikis).

One day, however, the news on the TV start talking about a giant monster going on a colossal rampage over in Seoul. Needless to say, that's terrifingly bizarre in of itself, but then Gloria discovers something really weird about the monster: Whatever movements she herself makes, the monster repeats.