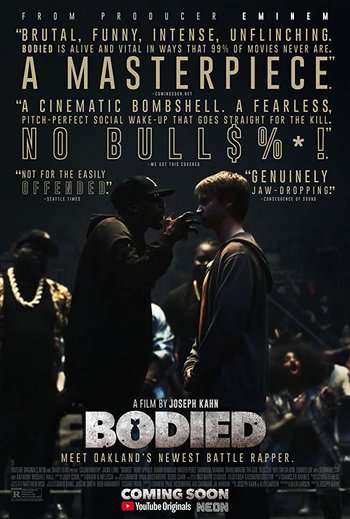 Bodied is a 2017 battle rap comedy-drama film directed by Joseph Kahn and produced by Eminem, reportedly loosely based on his life.

The film is about Adam (Calum Worthy), a white graduate student at Berkeley who, while working on a graduate thesis on the use of the N-word in battle rap, becomes a battle rapper himself.

His passion isn't exactly met with open arms — his girlfriend Maya is taken aback by the perceived misogyny of the raps, and his father (a professor at Berkeley) doesn't take the idea seriously.

As he climbs up the ranks, his passing enthusiasm turns into a competitive obsession as he earns success and sparks outrage alike.

Bodied won the Toronto International Film Festival People's Choice Award alongside Fantastic Fest's 2017 Audience Award. Exclusive streaming rights for the film were acquired by YouTube Red in January 2018, with a limited theatrical release in November of that year.