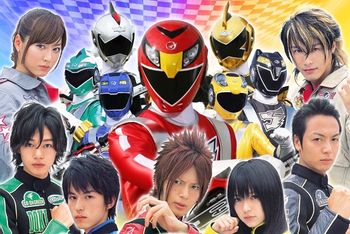 Engine Sentai Go-onger (roughly translated as "Blazing Godnote pronounced as Enjin Squadron Go-onger") is the 32nd program in the Super Sentai series, which aired from 2008 to 2009.

The world of Go-onger is split into eleven different worldsnote Human, Machine, Samurai, Christmas, Junk, Sound, Stormy, Gunman, Magic, Prism, and Grass World, of which the place we live (the Human World) is only one. When three high-ranking members of the Gaiark, a machine clan which thrives on pollution, escape into the Human World, they are pursued by the inhabitants of the Machine World: Engines, humongous sentient vehicles.

Discovering that their power is greatly limited in the Human World, the Engines recruit three people at a racing circuit to become the Go-Onger and fight against the polluting conquests of the Gaiark. They are later joined by two more members, and a pair of psychic siblings who form the aloof Sixth Ranger duo "Go-On Wings".

Originally unintended to be contractually bound to its US version, Go-onger was more in the vein of Carranger, both in its vehicle theme and its strong dedication to comedy over a serious storyline. It also plays a lot of Japanese Media Tropes, in particular Super Sentai tropes, very often, even to the brink of parody.

Partnered with the Kamen Rider series Kamen Rider Kiva before concluding its airing alongside the first episodes of Kamen Rider Decade in the Super Hero Time block. "Adapted" for American audiences as Power Rangers RPM, which chose to take the goofy footage of Go-onger and created the darkest Power Rangers series to date.

In 2018, a Reunion Show, titled Engine Sentai Go-onger 10 Years Grand Prix, was announced for a release later that year, making Go-onger the third Sentai to receive a 10 Years After special after Dekaranger and Hurricaneger.

In one of the show's only good action scenes, Land Pollution Minister Yogostein meets his end by the Road Saber.

In one of the show's only good action scenes, Land Pollution Minister Yogostein meets his end by the Road Saber.