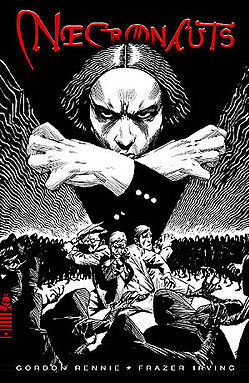 "I see. You're aware, of course, that we are being followed?"
"For the last twelve blocks. You propose we do something about it?"

Originally appearing in 2000 AD, Necronauts is a graphic novel which features a League of Extraordinary Gentlemen style team-up involving none other than Harry Houdini, Sir Arthur Conan Doyle, H. P. Lovecraft and Charles Fort facing Cosmic Horror. The story is set in 1926, created in 2001 by Gordon Rennie and Frazer Irving. It draws heavily from Lovecraft's Cthulhu Mythos and many of the legends surrounding Houdini.