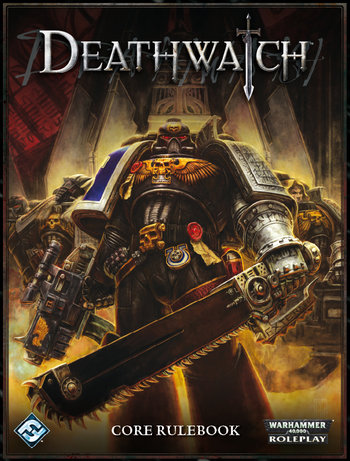 Do not ask "Why Kill the Alien?", rather ask, "Why not?"
Advertisement:

Deathwatch is the third in the Warhammer 40,000 roleplaying game series. While Dark Heresy focuses on agents of the Inquisition, and Rogue Trader focuses on rogue traders and their crew, Deathwatch casts the players as Space Marines of the Ordo Xenos Deathwatch, a sort of special operations group tasked primarily with defending humanity from alien horrors. Even among the Space Marines, the Deathwatch are considered to be an elite unit — and when the typical Space Marine is a seven-foot tall Super Soldier with a standard-issue fully-automatic grenade launcher and armor that can stop a tank shell, that's pretty impressive.

Now think about what you're going to be up against...

Six Chapters are included in the core rulebook, five of which already exist in the Warhammer 40,000 canon: the Space Wolves, Ultramarines, Dark Angels, Black Templars, and Blood Angels. According to the blog, these particular Chapters were chosen to create stark contrast in tactics and personalities within the party between members of different Chapters (though the fact that they're also 40k's flagship Chapters, each with its own codex, probably doesn't hurt). The sixth Chapter, the Storm Wardens, are an original creation of Fantasy Flight Games; the lessons the dev team learned in creating this Chapter are expounded upon in the Rites of Battle supplement, so you can have a go at creating Chapters of your own, you special snowflake, you.

The game was first released in 2010. In Fantasy Flight Games and Games Workshop ended their partnership (and thus FFG losing the Warhammer licensing), which was picked by Cubicle 7.