Literature / Wizards, Warriors and You 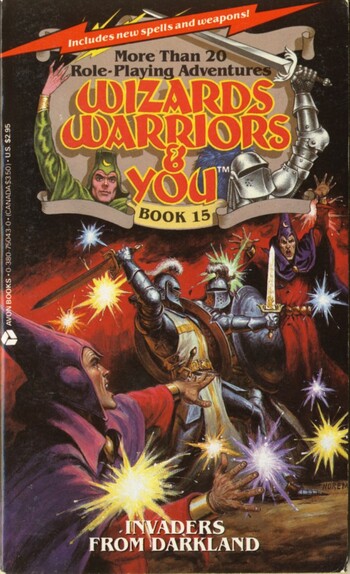 The Wizard arms himself with the Book of Spells, and can use anything within it when the book allows. The Warrior uses the Book of Weapons; he can carry any three weapons from it in addition to the Sword of the Golden Lion, an indestructible blade forged by the same blacksmith who made Excalibur. Every six books the assortment of spells and weapons would change.

The success of spells or battles are determined by such methods as flipping a coin, what time of day the book is being read, or picking a random number. While this lent a somewhat bizarre feeling at times, Wizards, Warriors and You lasted for a respectable 18 books.

Wizards, Warriors and You provides examples of: