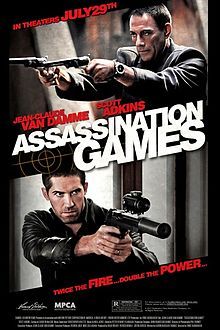 Assassination Games is a 2011 American action film directed by Ernie Barbarash, and starring Jean-Claude Van Damme and Scott Adkins. Scott Adkins is Roland Flint, an assassin who retired after a hit went terribly wrong. With his wife in a coma due to a beating and gang rape by his target, Polo Yakur, he took a sizeable amount of money from a dirty squad in Interpol and took his wife into hiding. To lure him out, the Interpol agents arrange for Polo to be released from prison, knowing that Flint wouldn't be able to resist the target. Jean-Claude Van Damme is Vincent Brazil, another assassin who takes on the job of killing Polo after Flint forgoes vengeance. Flint undergoes a change of heart, attempts the hit, and Brazil and Flint manage to both screw up each other's hits, leading to a rivalry that leads to friendship and betrayal.