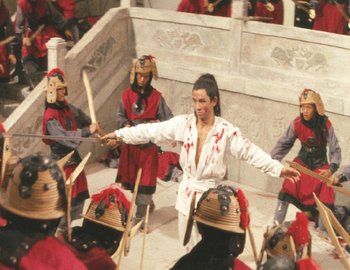 "So, who's next to taste my cold unforgiving blade?"

The Assassin is a 1967 martial arts epic from Shaw Brothers, starring Jimmy Wang Yu, Lisa Chiao, Tien Feng and directed by Chang Cheh, who in the very same year collaborated with Wang Yu and Lisa Chiao in One-Armed Swordsman.

A historical epic set in the twilight of the Ming Dynasty, Wang-yu plays Nie-zheng, a rebel leader and former warrior betrayed by a rival, where he ends up renouncing his past as a killer to live the rest of his life with his lover, Xia-ying. But when the past catches up with him, Nie-zheng - despite Xia-ying's pleas - decides to rejoin his former rebel legion to assassinate the Han Emperor and put an end to an age of tyranny, despite knowing he very well wouldn't live to see the aftermath of his success.

If One-Armed Swordsman is the film that establish Jimmy as a megastar, then The Assassin would be the film that typecasts Jimmy as a nigh-invincible, indestructible killing machine of martial arts cinema. This movie, and Golden Swallow, are the first two (of maybe a dozen) movies where Jimmy clearly kills more than a hundred people onscreen, making him the indisputable badass of 70s wuxia cinema.

The Assassin contains examples of: